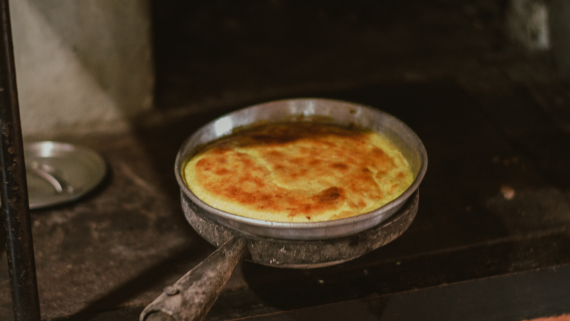 The city of Rivne as a regional center for decades has gathered the cultural traditions of all districts of Rivne region. The same applies to the culinary heritage. The territorial location of Rivne almost on the border of Polissya and Volyn has led to a combination of culinary traditions of these historical regions within the city. However, over time, old traditional dishes are less and less appearing in the kitchens of Rivne housewives and in the menus of local restaurants, and young people hardly know at least a few names of authentic delicacies.

Therefore, to preserve and promote the traditional culinary heritage of Rivne in 2020 launched an international project "Cultural heritage of the kitchen - the promotion of culinary traditions through the professionalization of the gastronomic offer of Lublin and Rivne", implemented by the Office for Strategic Development and Investment of the Rivne City Council. sustainable development of the city "together with the Government of the City of Lublin. The project is implemented with the financial support of the European Union under the cross-border cooperation program "Poland-Belarus-Ukraine 2014-2020".

At this stage, the process of studying the gastronomic features of Rivne continues. The team of the NGO "Agency for Sustainable Development of the city" establishes communication with local restaurants that seek to promote regional culinary traditions, and studies the history of the origin of traditional local dishes. As part of this process, an expedition took place in the village of Bilsk, Rokytne district, to study the culinary dishes that came to Rivne from this area. Members of the public organization visited the hamlet "Feshchuny", which is located among the forests of Polissya, where they were hospitably received by the hostess - Mrs. Eva and Mrs. Nina.They prepared the most popular local dishes - stew, sourdough baked in the oven, kulish with mushrooms and ribs, brine for mashed potatoes, cranberry juice and donuts sprinkled with poppy seeds - and shared their own culinary secrets, which are passed on to their families. from generation to generation. The cooking process was accompanied by stories from the lives of housewives and colorful authentic songs. Ms. Nina and Ms. Eva noted that they themselves change their culinary traditions in a modern way over time: “Today we dissolve bread with yeast, but not once. They threw bread, filled it with water and put it on the stove on the edge for the night. It's like playing on yeast.

Ms. Eva said that Rokytnivshchyna is famous for its kulish - here in each village they are prepared in a special way. Her family often prepares this dish on the basis of millet with the addition of mushrooms: "Pour millet, rinse - it's kulish. Rinse the millet until the water is clear. My mother taught me to put it in a jug and put a spoon so that the spoon would stand. That's enough. Dried yellow mushrooms were poured with boiling water. Let the kulish boil, then we will throw mushrooms».

The study of regional culinary traditions continues to this day, so the NGO "Agency for Sustainable Development of the city" plans several more expeditions to study the regional culinary heritage, especially the dish "Matsyk", which is unique to our region and deserves to become a culinary brand of Rivne.
The project "Cultural Heritage of the Kitchen - Promotion of Culinary Traditions through the Professionalization of the Gastronomic Offer of Lublin and Rivne" was created and implemented with the financial support of the European Union under the Poland-Belarus-Ukraine Cross-Border Cooperation Program 2014-2020. The content is the responsibility of the NGO "Agency for Sustainable Development of the City", and it does not reflect the position of the European Union.